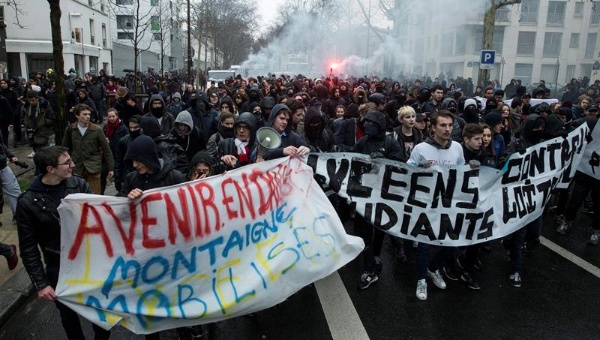 French workers continue to stand up for their rights

Recently, a delegation of the Autonomous CTA (CTA-A) was in Geneva to participate in the 105th International Labour Conference of the International Labour Organization (ILO). One of the most debated topics was the mass protests in France due to the labour reform presented by the government of the “socialist” Francois Hollande, which undermines employment security and erodes the French workers’ rights.

Today marks 100 days of the “Nuit Debout”, a continuous mass protest movement against the labour reform that was born at the Place de la République in Paris and then spread throughout the whole country. To us Argentina, it is essential to know and to understand what is happening in France, because both peoples are standing up for their rights, resisting the austerity imposed by neoliberal governments (even though in France is hidden under the name of “socialist”).

As we’ve stated in a previous article, the French workers’ movement and the General Confederation of Labour (Confédération Générale du Travail -CGT) play a decisive role in this demonstration of power and in the French people’s repudiation of this neoliberal reform on labor law which is in line with the reforms the EU demands from France.

Different sectors of the CGT are calling consecutive protest actions, and many of them are already on strike like the railway workers, dock labourers, workers from 16 French nuclear power plants, Air France pilots and air traffic controllers. They are claiming for better salaries and better work conditions and are at the same time, expressing themselves against the adjustment and the reactionary labour law reform.

The conflict between the French government and the workers intensified so much that the country’s oil and gas supply were at risk, since workers blocked the entry of the distribution companies. But that’s not the only way of resistance.

As the CGT reports, energy sector labourers cut off power supply in different companies and during government events like in the inauguration of the “City of wine” in Bordeaux, when trade union activists turned off electricity plunging the building into the dark, which marked a symbolic moment of the struggle.

On the other hand, electric service was restored to the poorest homes. That way, not only they won a higher support from society, but they also increased the pressure on the government and employers, and made clear that when workers are united in the struggle they are capable of shaking the most rigid structures.

It is clear that these protests against the labour law reform worry the French government, especially now, with the UEFA Euro 2016 taking place in France. Because of it precisely, President Hollande decided to extend the state of emergency which was implemented last November 2015 after the Paris attacks, until at least July this year. No need to mention that it has been mostly applied in the repression of protesters, expecting to break their spirit of resistance.

In that context it is important to stress that the Autonomous CTA’s delegation, in the voice of Pablo Micheli, asked the Assembly of Workers for solidarity with the struggle of the French workers’ movement which is resisting the labour reform.

At the same time, in Argentina we need to raise awareness on the power the workers’ movement has when it is united and generates the intersection of different struggles, as it happens in France, where the young and the eldest, students, workers and pensioners keep gathering in many squares to discuss in what kind of society they want to live in, and what are the ways of constructing that society.

From the Autonomous CTA we express our solidarity with the struggle of the French workers’ movement and we will keep on mobilizing and building up popular power from the CTA-A in order to resist Macri’s government measures against the workers’ rights and their purchase power.

Our demands at the ILO for union democracy and freedom and against restrictions on the right to strike were very close to the reality of the struggle of the French workers’ movement. What we didn’t imagine was that after coming back to Argentina, we would learn about the Argentina’s Supreme Court of Justice decision of restricting the right to strike only to registered trade unions, which is a step forward on the demand of the ruling class for restricting our right to strike. This is the reason we insist on looking at what’s happening in France, express our solidarity with the workers’ struggle which is not that different from the struggles we have here, and we need more than ever the unity of workers across the world.

See the article in Spanish here.