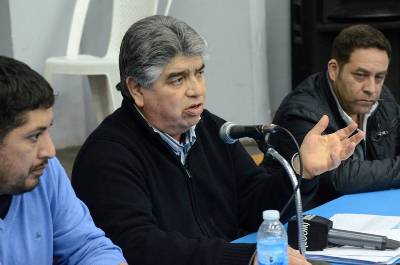 José Rigane: “We must fight rate hikes and also discuss the energy model”

Secretary General of Luz y Fuerza Mar del Plata, and of the Federation of Energy Workers of the Argentine Republic (FeTERA) and Deputy Secretary of the CTA Autónoma, José Rigane, participated in the debate&lecture “Tarifazos y Crisis Energética” (Rate Hikes and Energy Crisis) organized by the CTA Autónoma (CTAA) in Mar del Plata.

During the lecture’s introduction, Diego Lencinas, Secretary General of the CTAA in Mar del Plata, stressed that “debates about the energy model in our country are necessary in order to discuss, not only the impacts of the rate hikes, but to raise initiatives that help overcome the current situation.

Rigane thanked the invitation and the public’s attendance and started the conference by saying that “here we have an opportunity for exchanging opinions on a complex topic, because those in charge of energy are not telling us the whole truth about what is happening. We don’t have the absolute truth, we’re stating our opinions. Ours is a political view, not in favour of any party, but in favour of the Argentine people and its sovereignty.”

According to him “the discussion about energy is not part of the general debate in society. It is a subject seen as something of minor importance, compared to other topics like Public Education, Healthcare or Childhood, because they have made us believe it is just for experts to talk about, and not for the general public. Hence, the vast majority has been left without the possibility of deciding on the matter. Now, we are saying the opposite of that: we are saying energy is everybody’s problem because it has a great strategic importance and cannot be handled by just anybody.”

“Energy is not a commodity, is not a pack of “yerba mate” or spaghetti, that you can just go and get at the supermarket, and you can choose from a range of brands and prices,” Rigane underlined. “Energy is a social good and should be in the hands of the Argentine people. It is also a human right, which is under-recognized compared with other rights. But in the 21st Century, we all need access to gas, water and electricity, in order to have a decent life. There’s no dignity without access to energy, and if its price I cannot afford, then I’ll be incapable of a decent life, and this is essential,” he stressed.

Rigane also referred to the international situation and emphasized that “in the world, there is 1.2 billion people that have no access at all to energy. When someone talks about “energy poverty” is talking about those families who use more than 10 percent of their income to pay for public utilities. We are not saying energy should be for free, but it must be accessible to people. An example of all this is what happens in Africa where they have the resources, but the average lifespan is of 45 years, because most of the population has no access at all to energy.”

Rigane said that the rate hikes in the country are a consequence of this model. “If we want to transform this reality, we have to change the model, because if we just stay and argue about consequences, we may modify the result and have some discount in the rates, but we would be missing the opportunity of recovering energy sovereignty, of discussing whether we will produce gas, oil or gold and what will we use it for.”

“Today someone else is deciding this for us,” Rigane emphasized, “and this is why we have an extraction-based model which also causes pollution, like mega-mining, fracking or monoculture plantations,” he said, and added “If we wish to change this, then the energy model has to change and after that, the production model should change as well.”