CTA-A meets with Minister of Labour: “We leave empty-handed” 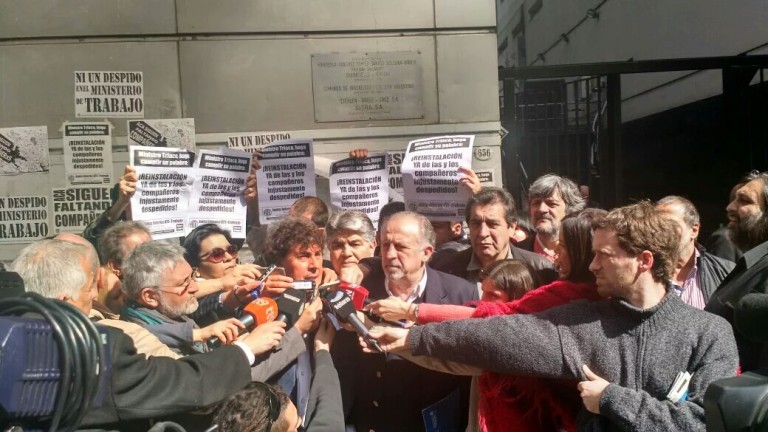 On Friday morning, September 9, representatives of the CTA- Autónoma (CTA-A) and the CTA de los Trabajadores (CTA-T) met with the Minister of Labour, Jorge Triaca.

At the end of the meeting, Pablo Micheli and José Rigane stressed that they left “empty-handed.”

The meeting was highly anticipated because it was the opportunity to raise all the claims and demands the CTA-A had to the Minister of Labour: the loss of purchasing power due to inflation; the reopening of collective bargaining; an emergency increase of retirees’ pensions to equate it at least with the current minimum wage (8.000 pesos); the end of the criminalization of protest and the persecution of union leaders in the province of Misiones and protest and the persecution of the sugar workers of Jujuy; and the modification of the income tax scales.

Rigane said that “there was kindness and good dialogue, but they told us about improvements that will come in the future, low inflation and an economic rebound for 2017. They talked about time, but we workers cannot wait any longer. So, beyond the nice and sympathetic speeches, we think it’s necessary that the three main trade unions call a general strike.”

The Secretary General of Luz y Fuerza Mar del Plata said they will “wait for the resolution the CGT will take during the meeting of its Confederal Central Board, which is scheduled for Sept. 23rd. If there is an agreement, we will probably call a general strike for the first days of October. ”

Rigane remarked that the need for progress in granting legal capacity to those unions and federations who have been asking for it for a long time was also raised to minister Triaca.

“Especially from the Federation of Energy Workers -FeTERA- we have been asking for our legal capacity for 16 years now. This demand already has two resolutions from the International Labour Organization (ILO) and it is necessary that the government respects this international organization. We are also asking for the Ministry to begin with the Minimum Wage Commission so they can meet regularly throughout the entire year (to discuss the amount of the minimum wage), and not just once.”

After the encounter, representatives of the two CTA convened a press conference to give more details of the meeting with national officials.