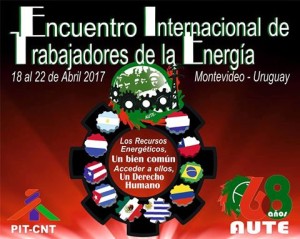 Many energy union organizations from across Latin America gathered at the International Encounter of Energy Workers in the city of Montevideo, Uruguay, during April 21st and 22nd.

In this declaration, Latin-American unions claim that there is in the region a “manifest dispute for public infrastructure and resources”.

In the document they highlighted the main conclusions on crucial issues such as land ownership and territorial disputes, human rights, energy as a human right, public and private property, sovereignty in Latin America, and the struggle of the different trade unions organizations and social movements in the continent.

To read the full statement in Spanish, click here