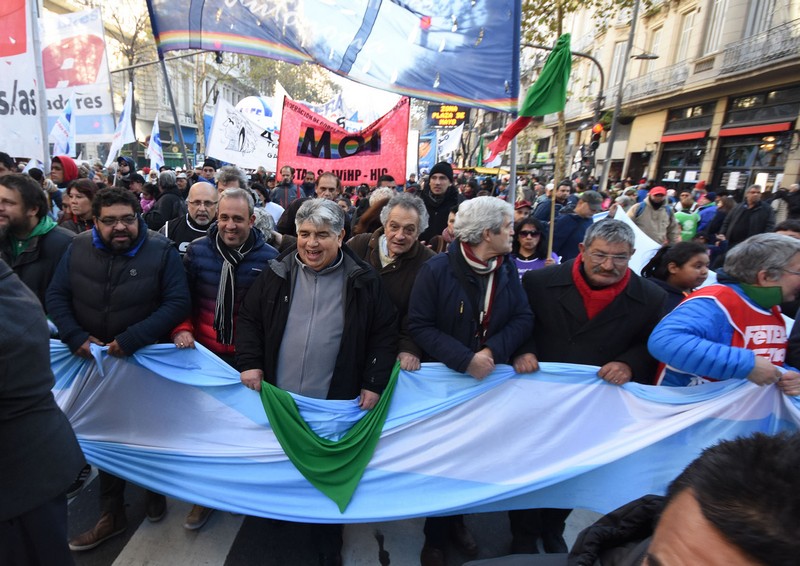 Massive presence in day of action of June14

Thousands of workers mobilized to Plaza de Mayo this June 14 as part of the 24-hour strike that the CTA Autónoma (CTA-A), the CTA de los Trabajadores (CTA-T), the Sindicato de Camioneros (Truckers’ Union) and dozens of social organizations had convened if the law against price hikes was vetoed by the president and the agreement with the International Monetary Fund (IMF) was signed.

“It strengthens our soul to take to the streets even though the next day there won’t be any miracles. Going out today gives us the strength to return on the 25th. And the national strike of the 25th force us to continue and strike again, and take to the streets again, until this economic model falls,” said Pablo Micheli, General Secretary of the CTA-A.

For his part, the head of the CTA-T, Hugo Yasky said that “we are going to show you a country on strike and struggling. Such is the picture the local oligarchs who kneel down and surrender to the IMF, will have. The road of the unity of the workers’ unions”.

From Mar del Plata, an important group of workers of the Luz y Fuerza de Mar del Plata Energy Union, also participated in this initiative and carried out a 24-hour strike. José Rigane, General Secretary of the union said that “it was an impressive strike and mobilization called by the multisectoral 21F. It was a magnificent act, and a demonstration that we keep our word, since we had said that if there was a veto on the tariffs’ law and an agreement with the IMF, we were going to carry out this protest. ”

“It is clear that this fight continues. For that we must be more organized, have more unity and we need a greater presence on the streets. On that road, we have to dismantle this government’s auterity policies which seriously harm the workers’ movement, the grassroots sectors and guarantee greater benefits to the groups with an increasing concentration of wealth. This is our path and we will also participate in the general strike convened by the CGT, without any sectarianism. We are also working to make a great day of action on July 9 in defense of our homeland,” Rigane highlighted.