Home Employment Rigane: “Labor flexibility is underway and must be stopped” 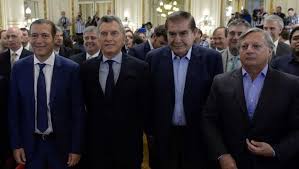 Rigane: “Labor flexibility is underway and must be stopped”

President Mauricio Macri, along with Juan José Aranguren, Energy Minister, Miguel Gutiérrez, President of YPF, Omar Gutiérrez, Neuquén Governor and some unionists were present Wednesday at the announcement of “productivity for the hydrocarbon sector and Vaca Muerta” , which includes benefits for companies and labour flexibility for workers. On this topic, José Rigane, Deputy Scecretary General of the CTA Autónoma and Secretary General of FeTERA, said that “with this announcement, oil companies will be able to proceed at their whim in Vaca Muerta”.

“Labour flexibility is underway in the country, because the national government has, through some union leaders in the oil sector, accomplished their first aim, which was that this discussion didn’t start as a debate, but that it started as a concrete reform. What just happened today with Macri’s announcement about the reform and labour flexibility is a concrete fact. It must be stopped,” Rigane emphasized.

He also said that “under this famous addendum to the oil workers’ Collective Labour Agreement (CCT), -originally from the ‘70s, and with the pretext of a technical innovation to search for oil and unconventional gas – what they have achieved is for workers to lose their rights and have to work now under different conditions, which are far worse and more demanding.”

Rigane explained that “this is about an activity that, in Argentina, is not regulated by law, this is about fracking –or the exploitation of unconventional deposits by hydraulic fracture- which contaminates the environment, the water, generates earthquakes and uses chemicals and millions and millions litres of water to create cracks in the deep-rock formations, just to mention a few aspects. Since there is no law regulating this activity, oil companies will proceed at will.”

In the agreement, he said, “there is one company, which is a stock corporation like YPF, which despite being majority-owned by the State, is a stock company. The other companies involved in Vaca Muerta are foreign multinationals with US capitals like Chevron, or we can also mention Shell, or the French Total or PAE.” He added that “this means that the agreement between YPF and Chevron signed under Cristina Fernández de Kirchner’s administration, and now deepened by Macri and Aranguren, is seeking the goal of believing that with fracking, and the exploitation of non-conventional energy sources, we will have solved the people’s problems.

“We will not need too much time to prove that all this is a big lie, because the only thing they are going to leave are many villages entirely contaminated, lands drilled by the wells and thousands of workers laid off and excluded because they are not going to have a job under this new collective bargaining agreement,” said Rigane.

“We must not forget that in order to carry out this initiative, the first thing the government does is to commit to multinational groups to set a price three times higher than the price paid in the international market for a million BTUs, that is to say, gas,” he said.

Rigane added that “with these measures, oil companies will receive a higher income than any company could receive anywhere else in the world. And it is the Argentine people who will end up paying for this, the same way that we have been subsidizing the multinational oil companies when the local barrel was invented with a price above the international barrel of crude. This situation has been sustained for several years. Or, also, when the people subsidizes oil companies when loading fuels at the service stations, and so the announcement of an 8% increase in fuels has to do directly with this subsidy policy and its aim is to benefit the oil companies, to the detriment of sovereignty and to the detriment of all workers and the people.”