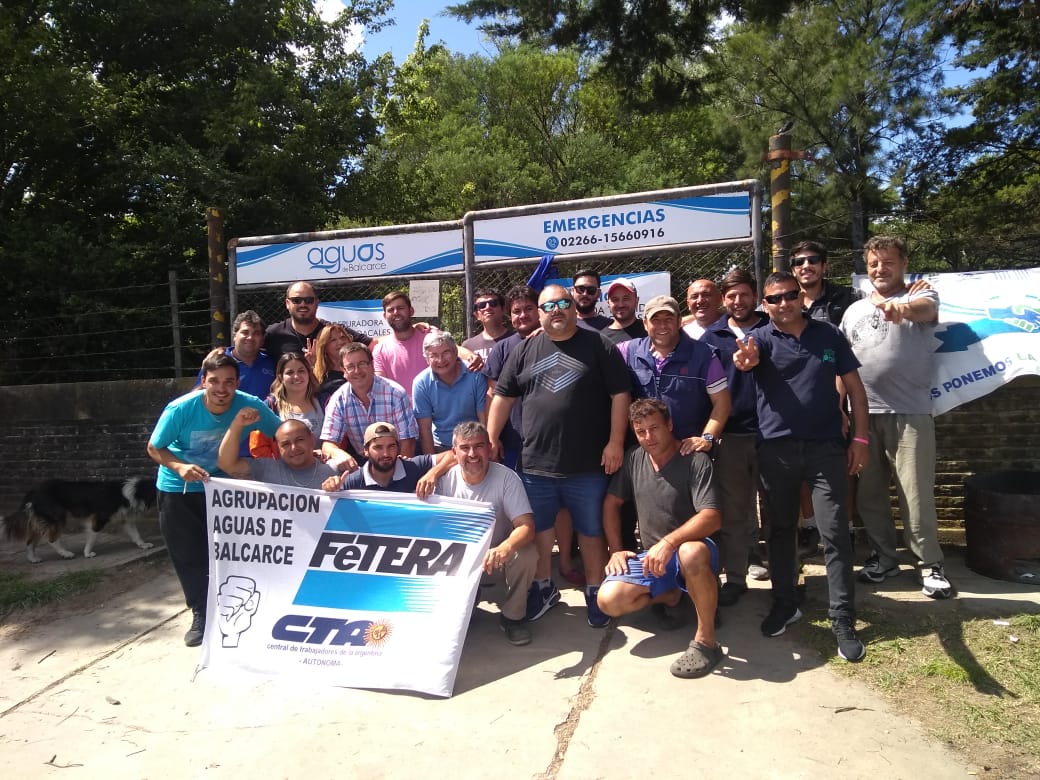 Struggle and organization do succeed!

After months of conflict, comrade Sebastián Cabeza, from the company Aguas de Balcarce (concessionaire in charge of the water service) was reinstated to his work, as we had been demanding from the Federation of Energy Workers of the Argentine Republic (FeTERA).

This Tuesday 11th in the morning we were able to reverse Sebastian’s dismissal, unfairly fired for demanding the right to trade-union freedom.

During past weeks successive actions were carried out in Balcarce to demand reinstatement and for the privatized company to provide a quality service to its users.

More than 5 thousand signatures from neighbours were gathered, an “acampe” (a form of protest similar to a sit-in) was carried out for 7 days in front of the company’s plant and the councilmen, the political power of Balcarce and the community were informed of the reasons of the conflict.

As a result of this fight, today we achieve the reincorporation of comrade Sebastián Cabeza.

At the end of November 2019, the company Aguas de Balcarce, dismissed the worker Sebastián Cabeza without any cause, which was denounced as union persecution, since the workers of this privatized company demand the recognition of FeTERA.

Last week, the company broke the truce agreed in the Ministry of Labor and told several workers not to show up for work, putting at risk the provision of public service of running water and sewers. Nor did it allow for Sebastián Cabeza -whose dismissal had been suspended since FeTERA denounced the union persecution and ignorance of the constitutional rights that protect this freedom in Argentina and of the international agreements signed by our country with the ILO- to continue working.

Comrades affiliated to FeTERA, together with the support of all the trade union centers that articulate within the Multisectorial 21F of Balcarce, fought to reverse this dismissal without cause considering it was arbitrary and that with the force and conviction of the struggle of the working class as a whole, any injustice can be reversed, including A DISMISSAL WITHOUT CAUSE.

We greet and congratulate the colleague, and his family who accompanied him through all these months of uncertainty and all the company’s coworkers, who were part of all actions in defense of workers and labor rights.

We know that the only struggle you lose is the one you abandon!

Federation of Energy Workers of the Argentine Republic – FeTERA