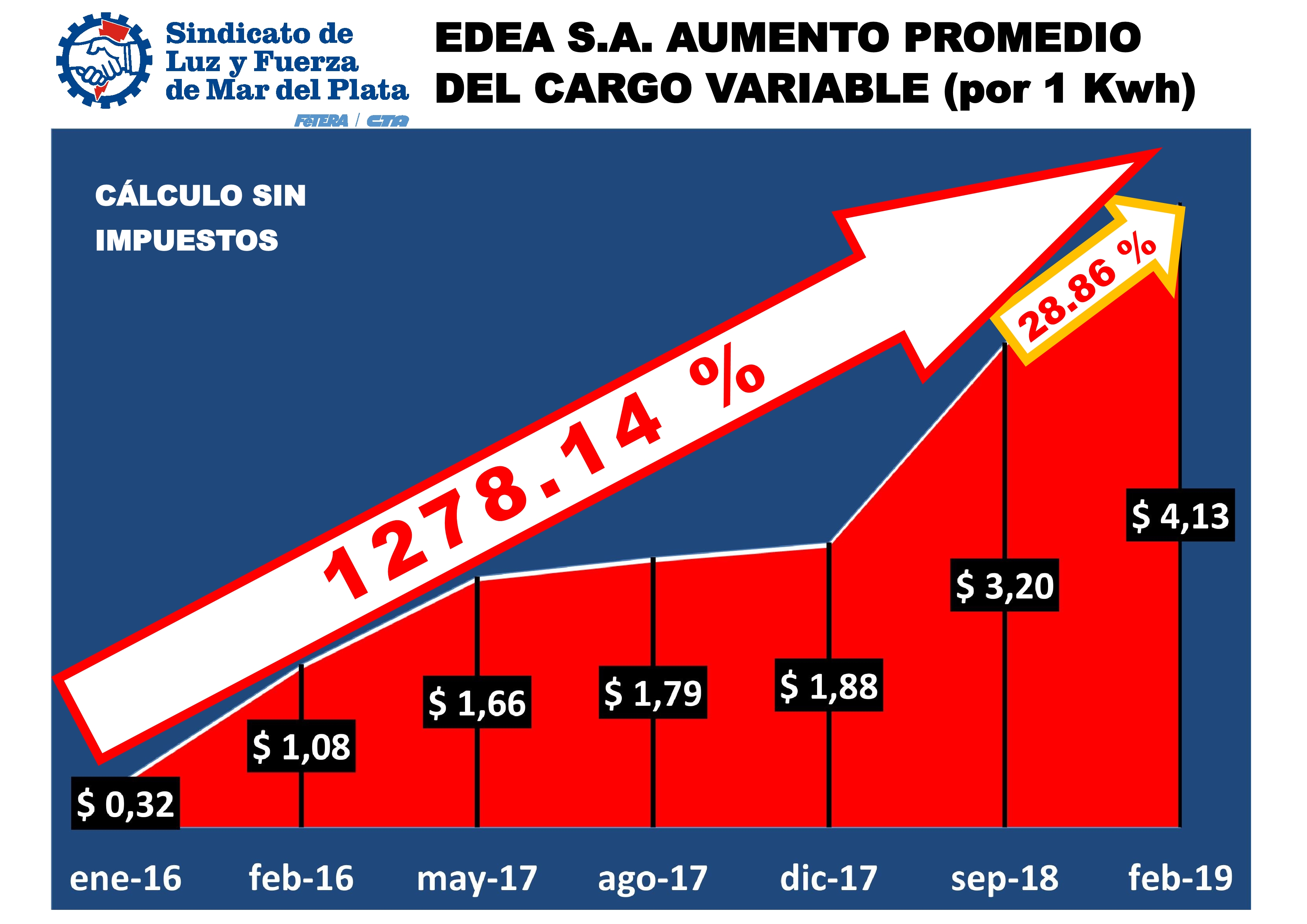 “The new electricity price hike punishes those who use less power”: José Rigane

In a recent press conference, representatives of the union of “Luz y Fuerza de Mar del Plata” explained how the new electricity price increases will work in the Province of Buenos Aires. José Rigane, General Secretary of this energy union detailed each of the items of the rate hikes which are already in force and will soon reflect on the peoples’ bills.

In 2019, electricity bills will increase 47% in the province of Buenos Aires. At the beginning of this month, the first part of that increase, which will be on average 33%, came into effect. Then there will be other increases of 5% until reaching 47% in the year.”This rate hike has an impact on all users and punishes those who use the least of energy,” condemned Rigane.

He also explained that “there are some increases that are extremely significant, and these do not appear as news but will seriously impact the user on his final bill. For example, reactive energy charges will increase by 456%. This is an item that the company charges depending on the type of consumption that each user has.

Another increase that does not appear in the news is that for 6 months the provincial government authorized to charge all users 54 cents per Kw / Hr sold by EDEA and that this distribution company began to charge it on their bills six days before it was published in the provincial government resolution. This means that, if we take the announced increase and add this other increase made by the company, the total amount for these 6 months goes up to 65% and this is not counted anywhere.”

“If we talk about an annual inflation of 28% but we have an increase of 47% of the electricity tariff, and frozen wages, low purchasing power, poverty growth and indigence, we see that 2019 will be much worse than last year,” stressed the General Secretary of the Luz y Fuerza de Mar del Plata trade union.

According to Rigane, these rate hikes keep Argentines out of access to basic services: “these new price hikes make it increasingly difficult to guarantee access to energy, a basic right of all citizens to have living conditions according to the 21st century. Not being able to access electricity, gas and water means less quality of life, and this is not a minor issue. That is why we strongly reject former minister Juan José Aranguren’s sayings who argued that energy is not a human right.

This is absurd, because public services can not be substituted. These rates hikes make energy poverty grow in a city like Mar del Plata, which has high percentages of unemployment, when more than 10% of a family income must be used to pay for services. We see that there is no initiative to solve this type of problems. There is no political decision to stop utility price hikes.

The mobilizations against these rate hikes, organized by trade unions in every city and province have been multitudinous, and in spite of that the Government has taken no steps to curb these utility price increases. This is why mobilizations and marches will continue throughout this year and from the CTA Autónoma we propose to make a National Strike of 24, 36 or 48 hours because frankly there is no other alternative.”