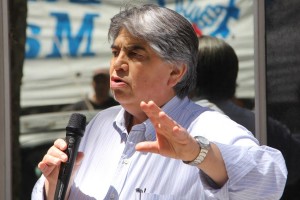 José Rigane, Secretary General of Luz y Fuerza de Mar del Plata, stated that he strongly opposes any attempt of privatizing the company Centrales de la Costa Atlántica (CCA SA), which manages a total of four power plants in the province of Buenos Aires. According to different versions, the authorities of the provincial government are evaluating to transfer the percentage of state participation they receive from the company, to private hands.

Centrales de la Costa is a public limited company, in which most shares are owned by the provincial government and it manages power stations on the coast of Buenos Aires, including the Central 9 de Julio de Mar del Plata.

Rigane explained that “a few days ago we met with the President of the Company, engineer Damián Andino, and we let him know that we were going to oppose any privatization attempt. He told us that he had no knowledge of these versions or that it was a governmental initiative.”

The union leader explained that “currently 30 percent of the company’s generating park is new, as a product of the investments made in the Villa Gesell plant and the two new equipments in Mar del Plata, which came with the repowering that we claimed for 18 years which was inaugurated a year ago.

The other 70 percent has still a long useful life, on average of 40 years. This new generating park enabled the company to sign new contracts with CAMMESA (administrator of the wholesale electricity market), and surely this year will end for them financially balanced or with a surplus.

The deficit they say is 100 million pesos may be due to the situation prior to the repowering process and the non-cancellation of the debt owed to the generators, as the distribution companies did get. But today the financial situation is different. ”

There is also talk of the possibility of dismissals, because, according to some versions, the company has 300 more workers, to which Rigane replied: “I do not know where that figure comes from, that the company has too many workers.”

The company has around 480 conventionalized workers in total. In Mar del Plata there are about 150 conventionalized workers. There may be more workers, but those are political positions, hierarchical officials, which is a decision of each government and us workers have nothing to do with it. Currently, the company operates with the minimum operational staff, both technical and administrative.”

He also explained that the “repowering we had been claiming since 1999 -when many people told us that all we had was an interest in the entry of new workers- did not mean the entry of any other worker as a result of those investments. The new technology needs less labor forcé and less maintenance.”

According to the unionist, “it would not be the first time in Argentina that the State makes an investment and then cedes the benefits to a private company. We are going to oppose any initiative of this kind because we already know what the privatizations meant in the energy field, in the 90s and with the Duhalde government: reduction of personnel, loss of labor rights and an increase in tariffs “.

This may all be a rehearsal of the authorities to see how we react, but this is a government that has a policy of going against workers’ rights. They have showned it at a provincial level, with the bankers and casino workers. At a national level, there are mass layoffs both in the public and private spheres and the possibility of seeing Argentina developing in the industrial sector is being harmed because they are dismantling institutions such as the INTI or the scientific-technical organisms. It is a very serious situation that should make the citizens react, because we are not only talking about jobs but about the strategic role of any State that wants to develop. “