More than 100 delegates from all over the country, from the sectors of oil, gas, mobile power, electricity, nuclear energy, water sector, mining, service stations as well as government employees and retirees among others sectors, met to discuss the Federation’s central axes for the future.

FeTERA, who is part of the CTA Autónoma, carried out an in-depth discussion focused on: the Federation’s trade union status, the fight against the rate hikes in utilities and other services, the economic adjustment implemented by the national government of Mauricio Macri and the future of the unity of the labor movement in Argentina, among other issues.

During the first day there was a thorough debate of the current energy model and the situation of the sector’s workers across the country. The attending leaders evaluated what they considered to be a very complex scenario. Some of the speakers were: 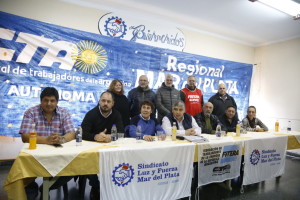 Julio Acosta, General Secretary of Luz y Fuerza La Pampa, who stressed that “energy companies should be in the hands of the State. In what type of State is a discussion that will come later. They must be state-owned because energy is a strategic resource for a country and without it we cannot have a horizon of emancipation as a people”. He also remarked that “the singularity of the province of La Pampa is that it is taking a different direction from what is being done in the rest of the country,” and highlighted the role the “Intersindical de La Pampa” is having in the struggle in defense of workers.

For his part, the Secretary General of the union of Luz y Fuerza de Zárate, Néstor Iparraguirre , said that “the decision of not building the fourth power station in Atucha and stopping the Nuclear Plan is an attack on sovereignty and on labor” and added that “we want the 4th nuclear power plant to be built and for the 5th to be built with the technology that we developed in Argentina. We are going to file a complaint on Tuesday, August 28, in the Chamber of Deputies of Congress so that the Nuclear Plan is not destroyed and for the law to be fully implemented,” Iparraguirre concluded.

Also, Marcelo Espíndola, General Secretary of the Asociación Gremial de Trabajadores y Personal de Estaciones de Servicio y Afines de la Provincia de Córdoba (AGTPAC), remarked that “we are in full fight against dismissals in service stations, as in the case of Shell Italservice in Río Cuarto. The political power, trade union bureaucracy and the business sector will not thwart the workers’ struggle for their rights.” 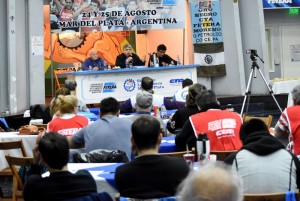 During the second day, the Congress also analyzed the economic and social situation of Argentina and its labor movement. The many participants pointed out the strong offensive of capital against labor, natural resources and society as a whole, which is expressed as a furious attack on labor and union rights. This situation has aggravated since the assumption of Mauricio Macri in December 2015 as president of Argentina and even more with the agreement signed with the IMF for three years since June 2018.

The final declaration of the Congress, entitled “The popular challenges to the right to energy”, stressed the importance of energy as a human right, the defense of energy sovereignty and common goods. It also denounced the agreements the government has made with multinational energy companies, which only bring harm to the country.

In this declaration FeTERA remarked that the energy crisis has a solution, but it requires to go beyond the concept of energy as just another commodity, which is necessary for the profits of transnational oil and energy companies. This is the main concern of FeTERA and the organizations part of FeTERA.

The fight against the sharp spikes in utility rates is very important and a worrying subject for users. FeTERA calls users to join energy workers in the struggle for the human right to energy and support the initiatives that different associations and groups of users and consumers take forward in the battle against the continuous rate hikes.

From FeTERA we promote the social property of energy, involving those who generate, distribute, transport and use energy. Society is challenged to assume the model of energy sovereignty.