“After rate hikes utility services have not improved”: Rigane 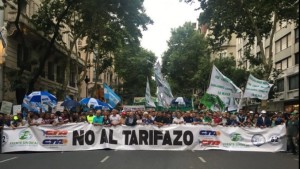 José Rigane, General Secretary of the Federation of Energy Workers (FeTERA) and Deputy Secretary of the CTA Autónoma, said in a recent interview with “Insurgentes” in Radio Sur 88.3 that utility fares are those of the first world but with a much more precarious service.

He said that power cuts occur all accross the country and not only in Buenos Aires. “In Mar del Plata there are power blackouts all the time, which is a demonstration of the lack of investment of the companies that at the same time make a lot of money, have more subsidies and extraordinary profits”, he stressed.

However, according to Rigane, the service is actually getting worse and will continue this path unless the energy model changes, but “the government is not willing to do this and less of all to regain State property, no only with the aim of a higher control, but also with aim of developing and guaranteeing public services in all areas,” he pointed out.

The union leader also underlined that “we must understand energy as a social good, as a human right, because everyone should be able to access energy, which is irreplaceable. We are not talking about a mere commodity, that people can get out of a shelf in a supermaket and can replace according to their monetary situation. Access to energy cannot be solved this way. Therefore, we must understand that energy is a vital resource to have a decent life, to get out of poverty.”

Rigane reminded that “all of these basic questions have been losing value since the privatization policy and foreignization that started during the 90s.”

“We are a in country that doesn’t have its own companies, so everything is in the hands of multinational corporations. In this country territory concessions are still made, an obsolete practice elsewhere, and these companies can then sell or export anything they find within that space, and they do all this at incredibly high prices: Argentina pays 7.5 dollars per million BTU, when in the international market the cost is of approximately from 2.5 to 4 dollars per million BTU”.

“The difference is subsidized by the Argentine people who must also pay for the final bills of gas and electricity, which are dolarized and which in the end are hard to pay because of the loss of purchasing power,” said Rigane and added that this is why energy ends up being “a luxury item that can only be accesed by those who have money.”

“Now, this ends if there was an energy model based on the recuperation by the people of the national patrimony, so that all Argentines can have access to energy,” he highlighted.