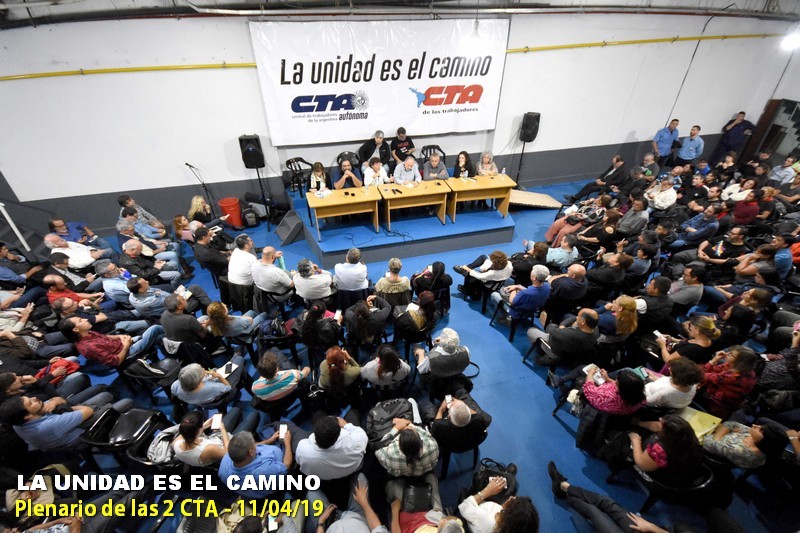 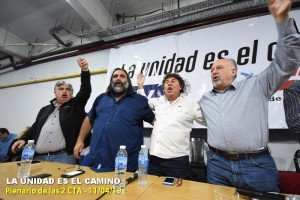 In a massive plenary session held Thursday, April 11, in Buenos Aires, the Autonomous CTA and the CTA of the Workers decided to convene a 24-hour national strike with mobilizations for next April 30.

The resolution was taken along with the call made by the “Frente Sindical por un Modelo Nacional” and the “Multisectorial 21F” who will also join the protest on that day.

In the plenary, held at the headquarters of the CTA of the Workers were the General Secretary of the CTA-A Pablo Micheli and Deputy Secretaries, José Rigane and Dora Martínez, as well as Hugo Yasky and Roberto Baradel on behalf of the CTA-T.

This industrial action was later endorsed in a joint plenary held at the Buenos Aires headquarters of SMATA, which involved more than 70 national unions with delegates from all over the country.

Among the main reasons and claims to summon this strike are:

– To reject any attempt to carry out a labor reform
– Changing the economic policy
– Take utility prices back to the cost they had on December 1, 2017.
– Repeal the pension reform
– Emergency increase for retirees and pensioners
– Defense of national production and labor.
– The end of the income tax on wages.

José Rigane: “Our strenght is in our unity”

José Rigane, who is also Secretary General of the Luz y Fuerza de Mar del Plata trade union, assessed that the strike to be held on April 30, “is the ratification of a path that we’ve started some time ago, especially from the Autonomous CTA, in which we’ve raised the importance and the need to carry out this strike. Finally, thanks to the coincidence of all the sectors -with the exception of some of the CGT- it is now possible to set the date of April 30 for the general strike and mobilization.

This is extremely important in a time when the country is suffering the severe economic and social consequences, especially in the popular sectors and in the labor movement, of an austerity policy carried out to the ultimate consequences by an insensitive and absent government. A government that also privileges the agreement with the IMF, the financial capital and multinational energy groups, leading a political initiative that ends up unloading the crisis on the backs of those who have less.”

The union leader also highlighted the importance of the unity of broad trade union sectors: “We are aware that in order to combat this policy, we need the broadest unity of all Argentines and even go beyond the limits established by any party allegiance. That unity must be built and this is a day-by-day process.

We are all aware that unity is what gives us strength and there is a growing understanding of the importance of taking to the streets, before, during and after an election. It is clear that we need to debate how to build and reformulate the structure of the labor movement, but with the possibility that we have today of coming together while belonging to different organizations. We must be ready and have enough understanding to establish the main enemy and have the ability to meet all of those who can make it possible to defeat that enemy.”

Do you think the government will change its economic direction after the strike of April 30?

– If one thinks that the Director of the IMF addressed all the presidential candidates, warning them of the danger of trying to modify the financial agreement that Macri made and acts with absolute impunity, believing herself to be the owner of the destiny and life of the Argentines who are condemned to poverty, exclusion, hunger and the impossibility of having a decent life, we see that they do not care about this. What they care about is their plan, even if it causes everything we are suffering. Bearing this in mind, it is clear that this is not only solved with a day of strike. This is a process of struggle, a process of organizational development and a demonstration of the ability of the Argentine people and the workers’ movement to fight for their demands and rights, the way they’ve done it throughout history under dictatorships and governments as negatives as this one.

What can be said to those not joining the strike because they believe them to be ineffective?

– When there is such a deep and negative belief about the importance of the trade union movement and the organization of the workers’ movement, there’s not a suitable response to be given in a few words. But it would be good to know the ideas and proposals of those sectors criticizing the strikes, because to say that something does not work is the simplest thing to do, but actually doing something is the most difficult. I would like to know what they propose in order to build an alternative that puts an end to this government’s policies that are causing so much harm.