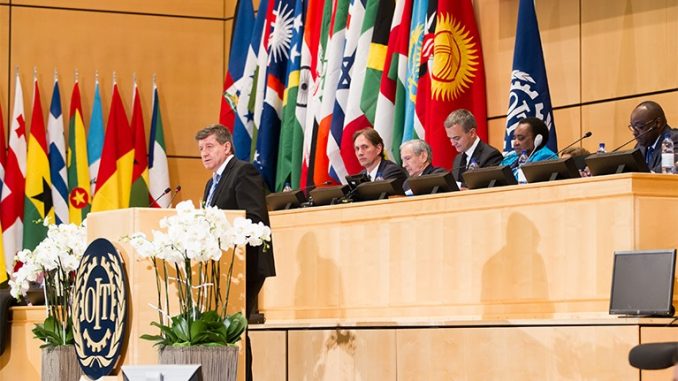 The Autonomous CTA denounces National Gov’t interference before the ILO

On Tuesday May 14, the highest authorities of the National Autonomous CTA (CTA-A) delivered an extensive letter to the Argentine offices of the International Labor Organization (ILO), denouncing the illegal interference of the Argentine Government in trade union organizations and the violation of the Freedom of Association.

The document is signed by the Secretary General of the CTA-A, Pablo Micheli, and Deputy Secretary, José Rigane. It is addressed to Guy Ryder, Director-General of the ILO, and to the Committee on Freedom of Association.

This letter explains in detail the entire conflict, which has had its most recent chapter at the end of last April when the nation’s Ministry of Labor signed the provisional certification of authorities for 90 days for the dissident sector of the CTA-A, despite the fact that there are two active judicial claims in the labor courts, without final ruling.

The text presented to the ILO details chronologically how the whole conflict was developed, it has attached all the required certified documentation and the request that both the Directorate and the Freedom of Association Committee of the ILO “engage in its study and issue the recommendations deemed necessary to restore the full exercise of freedom of association and demand the Argentine State for its effectiveness and to not interfere in the administration and action program of all trade unions, particularly regarding the facts described” in the letter.

In this letter, the Argentine government is also denounced for the violation of ILO’s Convention 87, to which the Argentine state adheres, and for impeding the exercise of the rights of freedom of association with an impact on unions’ autonomy and administration.