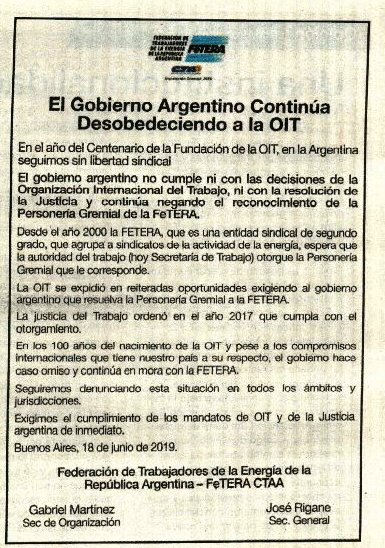 In the year of the International Labour Organization’s (ILO) 100th anniversary, in Argentina we still do not have freedom of association.

The Argentine government does not comply with the decisions of the ILO, nor with the judiciary resolution and continues to deny trade union status for FeTERA.

Since 2000, the FETERA, which is a second-level trade union organization [an umbrella union], which groups energy unions, is awaiting for the labor authority (which is no longer a Ministry but a Department under the Ministry of Production) to grant the corresponding Trade Union Status.

The ILO has issued various statements on repeated occasions urging the Argentine government to grant Trade Union Status to FETERA.

Labor justice also ruled in 2017 that the government must comply with the recognition.

In the Centenary year of the ILO and despite the international commitments our country has with it, the government ignores and continues delaying FeTERA’s trade union status.

We will continue to denounce this situation in all areas and jurisdictions.

We demand compliance with the mandates of the ILO and the Argentine Justice immediately.