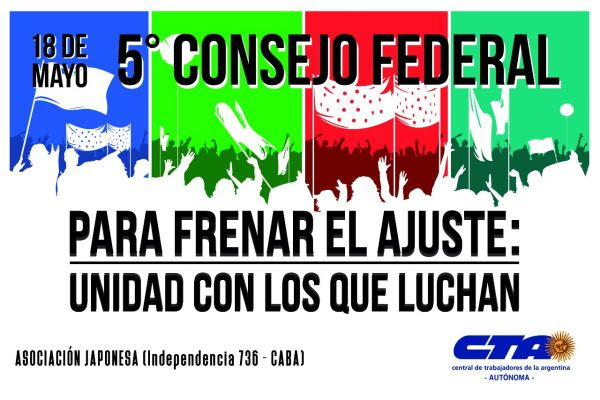 on: May 17, 2016In: General InformationNo Comments
Print Email

The 5th Federal Meeting of the Autonomous CTA (Consejo Federal de la CTA Autónoma) will take place next Wednesday, May 18th, at 9 am in the Japanese Association (Av. Independencia 732 ; Ciudad Autónoma de Buenos Aires). Along with the National Board, provincial and local union leaders boards will participate too. The assembly will discuss a series of topics under the motto “Unity of action to curb adjustment”.

Given the current social and political situation in our country, it is necessary to broaden our debate with the aim of strengthening ourselves in order to face the brutal economic adjustment, of which the working class and the people in general are suffering the worst effects.

In this context, it is urgently required to potentiate the Autonomous CTA’s development, based on our own organization, growth, strategy, and a stronger presence across the country and in the private sector, as well as developing new paths with greater autonomy, freedom and trade union democracy.

In the Autonomous CTA we are convinced that this encounter will help in the construction of the mass trade union organization the working class needs to have an influence on a just distribution of wealth.

Also on May 18th, Continental Day of Action will take place defending democracy, sovereignty, integration, social rights and specially defending the right to strike and against the criminalization of social fight.