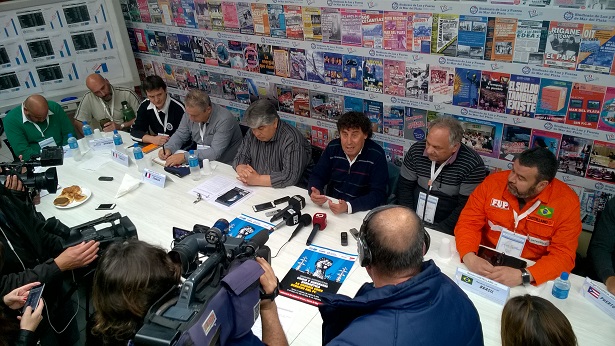 In the context of the 73rd anniversary of the energy union of Luz y Fuerza de Mar del Plata and the International Conference “Crisis and Energy Sovereignty”, Pablo Micheli, Secretary General of the CTA Autónoma (CTA-A) and José Rigane, Deputy Secretary General of the CTA-A, gave a press conference in Mar del Plata in which Micheli alerted that by giving the year-end bonus only to social movements and not to all workers “Macri’s government wants to bring us into a war with those who have less. We believe that the year-end bonus has to be for everybody.”

Micheli also referred to the need for a national strike. “The strike will be strong and will happen no later than the end of October.” He also stated that “we at the CTA-A will keep our efforts in proposing dialogue. But we will continue to take to the streets with our demands and our proposals. ”

Secretary General of the CTA-A also recalled that both umbrella unions (CGT and CTA) went to  the two chambers of Congress to bring their arguments and projects about the Law of Occupational Emergency and that social movements have presented themselves the project for a Law of Social Emergency. “These are workers’ projects which parliamentarians are studying and supporting. But the government says it will veto everything.”

“We are not saying just now that the salary for a typical family should be at 19.8000 pesos, as all economists are saying now, regardless of their ideology. We have been saying this for a long time. Today the minimum wage is less than 8,000 pesos. That should be the claim today, 20,000 pesos for a typical family in Argentina,” Micheli said.

He added that they are now asking specifically for the reopening of collective bargaining in order to discuss the 12 percentage decrease in wages purchasing power. And we are proposing an emergency increase for retirees. Why emergency? Because their minimum earning is of 5,600 pesos and we are demanding it to be of 7,600 pesos which is the current minimum wage. In other words, we are asking for 1,600 pesos for pensioners. Do you see?”

Micheli also said “what we see is a resounding resolution of the government to lift taxes on mining and the agribusiness and this did not generate any massive source of job.”

“The beneficiaries of this are industrialists and the banks, or those who do not have to pay an income tax, like the financial sector.”

“If the government does not want dialogue, there will be dialogue between trade unions, social movements, the church and other sectors.”