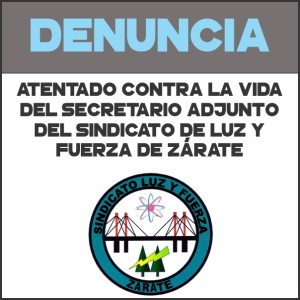 The Zárate Luz y Fuerza Union, which is part of FeTERA – CTAA, publicly denounces the attack on the life of Damián Straschenco, Deputy Secretary of the union and worker of the ATUCHA power plant.

On Tuesday, May 9, after his working day at Nucleoeléctrica Argentina Sociedad Anónima (NASA) -the company in charge of the Nuclear Power Plant ATUCHA at the city of Zárate, Province of Buenos Aires-, the Deputy Secretary of the Zárate Luz y Fuerza Union, Damián Straschenco, was alerted by the radiation measurement portals that his body had been exposed to high doses of radioactive material. Once the company’s safety devices were activated and the area’s employees were asked to establish the origin of such contamination, it was concluded that the personal water bottle in his own office had suffered an alteration of the liquid it contained and had inside heavy water from the reactor.

“I never believed that as a worker I could be exposed to an attack like this. But the radiation detector activated when I walked through it, and although I arrived in perfect condition, I left the workplace with radiation in my body. Not only this goes against our psychophysical integrity, but it also impinges on our labor source, thinking that we work and walk daily among criminals is really worrying, ” said Straschenco in a communication to his colleagues.

The presence of internal radiation in his body resulted in the implementation of a medical procedure to try and reduce the level of intoxication in order to be able of reducing the radiation exposure. Other studies were carried out at the atomic center of Ezeiza to evaluate possible damages in his body. Being exposed to these doses of radiation could result in serious health complications in the medium and long term.

“I do not know why or who would want to commit this attempted murder, as the case presented in the Federal Court of Campana is characterized. It is not my function to establish it either, but it is my duty to denounce it judicially and publicly as I am doing, with the clarity and seriousness required by a situation of these characteristics. It is a fact of national and international severity, not only because I am the Deputy Secretary of a trade union attacked from different sectors, but also because of the violation of all the security measures of a nuclear power plant. It is serious because it was an attack against the human life and psychophysical integrity,” he explained.

After what happened, the signs of affection and solidarity from many sectors multiplied . “In the face of such heinous events, there are no divisions and no fractures, so for them all my thanks and for the others, know that before you there is a group of workers that will not allow under any point of view that political or personal interests endanger our health or source of work and that this union will continue to defend each and every worker of NASA”, concluded Straschenco.

The Zárate Luz y Fuerza trade union expressed its “strong condemnation and concern for the lives of colleagues,” and ratified its “strong conviction in providing all the necessary elements to know who, within a company that handles part of the country’s electricity supply, attacked on the life of a worker.” They also warned that they “will continue to carry out daily work and union work, with integrity and conviction, claiming that ‘if they touch one of us, they touch us all’.”