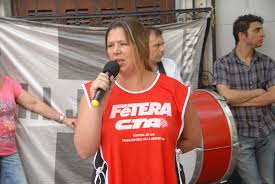 In an interview with the radio program Energía Nuestra, Romina Quintas, Union Secretary of the Luz y Fuerza de Mar del Plata trade union, spoke about the conflict in EDEA SA, the largest electricity distributor for the interior of the province of Buenos Aires. “The increase in tariffs in the province is for the benefit of EDEA, a company that sees energy as a commodity and earns millions of pesos,” said Quintas.

“EDEA continues to encroach upon our rights not only without incorporating staff: there are 100 job vacancies and they only requested 6 employees, which is in violation of the Collective Labor Agreement requirements,” she explained.

Among other things, Luz y Fuerza de Mar del Plata has been denouncing EDEA S.A. because it does not invest in improving the service to the detriment of their employees and users. The other strong claim of the union is that the company is outsourcing workers and does not respect the collective bargaining agreement.

“This situation leads us to continue battling against this multinational company whose only goal is to become rich,” the Union Secretary explained.

“The new owners of EDEA Sociedad Anónima is the DESA Group property of entrepreneur Rogelio Pagano, who is also the owner of distributors EDELAP, EDES and EDEN. This policy leads to the monopoly of electricity distribution in the province of Buenos Aires,” Quintas remarked.

She also explained that “we must add that in our jurisdiction there is a union (General Pueyrredón) which is only registered and is colluding with EDEA and obviously does not claim or demand anything. The claims for improvements for the workers are made by Luz y Fuerza de Mar del Plata.”

In the city of Mar del Plata and the area where EDEA SA has the license since 1997 and for 95 years, the number of inhabitants climbed 13% and reached 1,580,000 inhabitants.