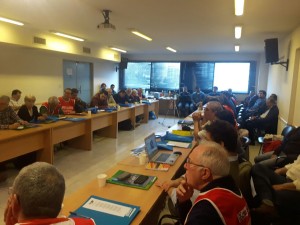 The Federation of Energy Workers of Argentina (FeTERA) gathered at the headquarters of the CTA Autónoma Nacional (CTA-A) in the Autonomous City of Buenos Aires, with the attendance of delegates and representatives of different trade union organizations from all over the country, decides:

1. To implement political actions (public announcements in newspapers and the media, letters of notification and a mobilization to the Ministry of Labor) regarding the justice ruling in favour of granting trade union status to FeTERA.

2. To demand the return of Santiago Maldonado and to hold the Argentine national government responsible because the National Gendarmerie, who acted in the repression of the Mapuche community on Tuesday, August 1st, responds to the national government. We call for people to attend to the September 1st mobilization for the safe return of Santiago Maldonado and all the manifestations that are summoned for the life of Santiago. They took him alive, we want him alive.

3. We demand the urgent clarification of the attempted murder of our companion Damián Straschenco, Deputy Secretary of the Zárate Luz y Fuerza Trade Union at the Atucha nuclear complex. The Justice, Nucleoeléctrica Argentina Sociedad Anónima (NASA), the Nuclear Regulatory Authority (ARN), the under-secretariat of Nuclear Energy of the Nation and the Minister of Energy and Mining must make themselves available to favor the investigation of this criminal attack. We believe it inconceivable and negligent to turn the victim of this attack and its union into those responsible for the smear of nuclear activity that this produced.

4. We oppose the national government’s attempts to deepen the austerity, the removal and reduction of labor rights and the reforms that favor greater degrees of exploitation, flexibilization and labor externalization. We support the unrestricted defense of Collective Bargaining Agreements.

5. Considering the extremely difficult socio-economic situation that the workers and the people are currently experiencing, which is expressed in:

– Minimum wages below the family basket.
– Pensions below the minimum wage.
– The poverty of 32% of the population.
– An alarming increase of indigence.
– Mass layoffs in different sectors of private activity.
– A continuous fall of the production of goods.
– An interference of the government trying to limit collective bargaining.
– The rate hikes of public services.

This plenary resolves, as a member of the CTA-A, to adhere to the initiatives developed by this central union to combat these austerity policies. The plenary also approves the policy of UNITY OF ACTION with all sectors that fight against this economic policy.

6. We oppose the energy rate hike and we oppose the concept of energy as a commodity. Energy is a social good and a human right. We also continue fighting for the recovery of strategic companies.

7. We add FeTERA to the activities promoted by the Asamblea Argentina Mejor sin TLC (Assembly Argentina better off without Free Trade Agreements), against the WTO between December 10 and 13 of this year.

8. To promote from FeTERA the implementation of the 8th ESNA in Argentina in occasion of the mobilization against the WTO.

August 26, 2017, CTA Autónoma Nacional, City of Buenos Aires.
With the presence of 60 delegates from all over the country from the different organizations affiliated to FETERA.