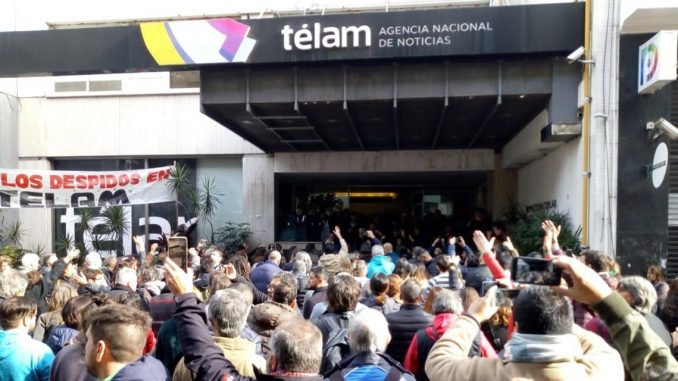 Solidarity with workers of Telam

The CTA Autónoma expresses its unconditional solidarity with the workers of the Argentine state-owned agency of news, Telam, who are in strike due to the layoff of more than 350 workers which was announced earlier this week.

This new round of dismissals is added to the more than 3000 press workers who have been left without work since Mauricio Macri took office. Such measure not only attacks the most basic and necessary rights of the affected families, but also undermines freedom of expression, given that the layoffs are completely discriminated “by profile”.

In this sense, we want to emphasize that, apart from being a brutal and drastic reduction, this decision is part of a media plan of concealment, disinformation and manipulation of the mass media, in order to keep people ignorant about what occurs and will occur in Argentina as a result of the policies of economic adjustment that are being applied throughout the country.

We are convinced that we must continue the path of unity with all those who struggle against this economic model which is deepening poverty and hunger in our country.

We demand the immediate reincorporation of TELAM’s workers!