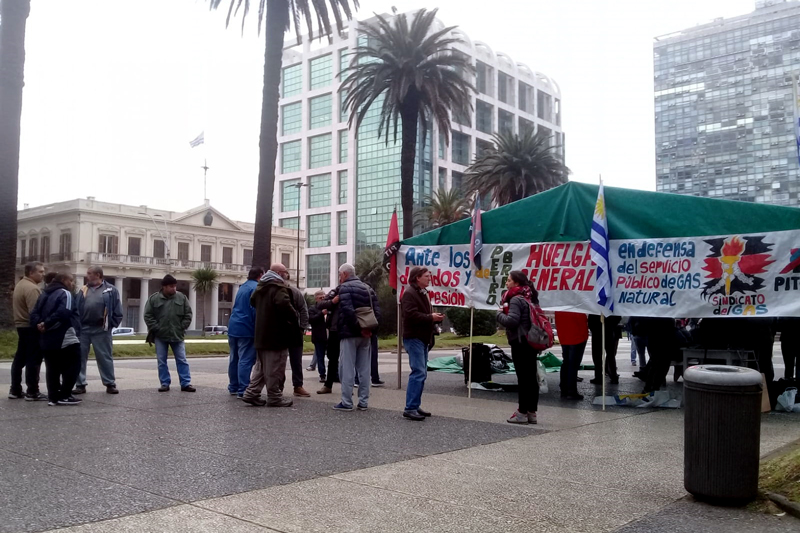 FeTERA Press updated the situation of the struggle Uruguayan gas workers have been carrying out for a long time. We share with them the same vision on energy sovereignty and they have participated in several occasions of international congresses and seminars of our Federation of Energy Workers.

Acording to the website (https://www.pitcnt.uy) last Monday June 10th the tent that symbolizes the struggle of gas workers was installed. It has been a “hard conflict that has had different stages of negotiation and most recently, proposals from the Executive Power were outright rejected by the multinational Petrobras.”

Alejandro Acosta, leader of the gas union (UAOEGAS) explained to the PIT-CNT website the importance of this day. “Today with the general strike a new phase begins in this conflict, but what is clear is that a new scenario starts from now on.”

Acosta recalled that last week he Petrobras company “rejected the proposal of the Executive Branch which tended to find a solution mechanism.” Despite the fact that the initiative “was not a solution in itself,” it gave them the opportunity of a couple of days with no industrial actions, “so they could sit down and talk”, he remarked.

Acosta also insisted that what’s at stake implies “sovereignty, the dignity of workers, the public service of gas and our labor source”.

“We must think as a country, in the face of Petrobras’ attitude. We can find a way out that leads to a shortening of Petrobras’s tasks in Uruguay. That Petrobras continues to lead public service, produces only more damage. This does not mean we are demanding from the government a solution that has to be ‘right now’, it means being able to figure out how will Petrobras exit the country, at the right time for the country, for the government itself and that at the same time during that transition there not be layoffs and policies against users; this is the path,” he underlined.

According to the PIT-CNT website, the launching of the general strike took place at the tent in Plaza Independencia. Many union leaders attended, including Tadeo Porto, from the Central Federation of Petroleum Workers (FUP) from Brazil, who expressed his solidarity with the struggle of Uruguayan gas workers and questioned Jair Bolsonaro’s policies in his country.

Acosta remarked especially the presence of the president of the PIT-CNT, Fernando Pereira. “It would not be possible for us to be here today fighting without the backbone of the trade union movement, without the unity of the PIT-CNT around this struggle which is part of the whole struggle of our people.”

Read more about this topic: