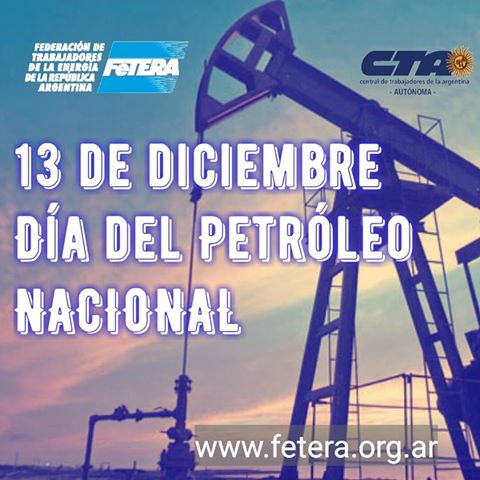 This Friday, December 13, National Oil Day is celebrated in Argentina.

On a day like this, but from 1907, the National State found oil in the city of Comodoro Rivadavia and a sovereign deed began at that moment. Engineer Enrique Mosconi promoted, in 1922, the creation of Yacimientos Petrolíferos Fiscales (YPF), the first vertically integrated national oil company dedicated to the exploitation, refining and marketing of oil and gas.

Both facts are milestones of a history later buried by the government of Carlos Menem and that still hopes that popular organization goes for its full recovery.

OIL AND GAS BELONG TO THE PEOPLE. ENOUGH WITH THE PLUNDERING.

The Federation of Energy Workers of Argentina (FeTERA) is the trade union organization of energy workers which claims the urgent need to recover natural resources and the energy revenue, which represents millions of dollars, in order to be able to plan our national development with sovereignty, and put an end to poverty and unemployment.