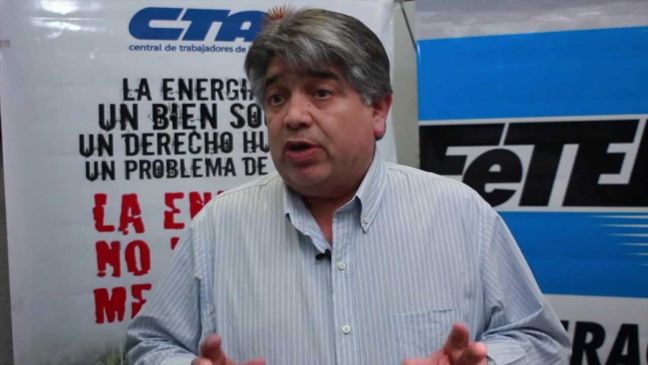 on: May 23, 2016In: Anti-layoffs bill, Minimum WageNo Comments
Print Email

Assistant Secretary General of the Autonomous Argentine Workers’ Central Union (CTA-A), José Rigane , considered it “a disgrace that the amount approved for minimum wage is of 8060 pesos, and it will take effect on January 2017. But what makes the situation even more serious is that this increase will be paid in three installments, and this is a mockery for those who need it the most, those who are being paid the minimum wage: precarious workers or those who are not conventionalized.”

Rigane, who is also the Secretary General of the Luz y Fuerza Mar del Plata trade union, said that “the Constitution clearly states that this minimum wage is for a family to meet all their nutritional, education, health and clothing needs, among others. Can anyone survive nowadays on a salary of 6.060 pesos or 8.060 pesos in January 2017? It’s shameful. That’s why we from the CTA-A, as well as the CTA led by Hugo Yasky, opposed to this. We regret that the business sector and the rest of the umbrella unions have agreed to this minimum wage.”

Rigane also said that the rate hikes in services and the inflation impact on the basic basket were not taken into account when setting this amount for the minimum wage. “We wished that it had been set at 9.000 pesos now, and then move forward. According to the information provided by workers of ATE INDEC, the basic food basket for a family has a cost of 18.000 pesos and we have to move in that direction.”

Anti-layoffs bill: “The president is wrong”

Rigane also considered President Macri’s veto to the anti-layoffs bill as a “political error.” “The president said this is a law against Argentines. How can it be against Argentines if the purpose of it, what it came to do, is to put a six months patch to prevent further mass layoffs? Here any employer can dismiss a worker without a cause.”  He also went on to say that: “If they are so sure inflation will decrease, and there will be investment and employment will increase, then what are they afraid of, why veto this law? The president is wrong; workers cannot wait for all this to happen to get their jobs back, because they need to eat today.”