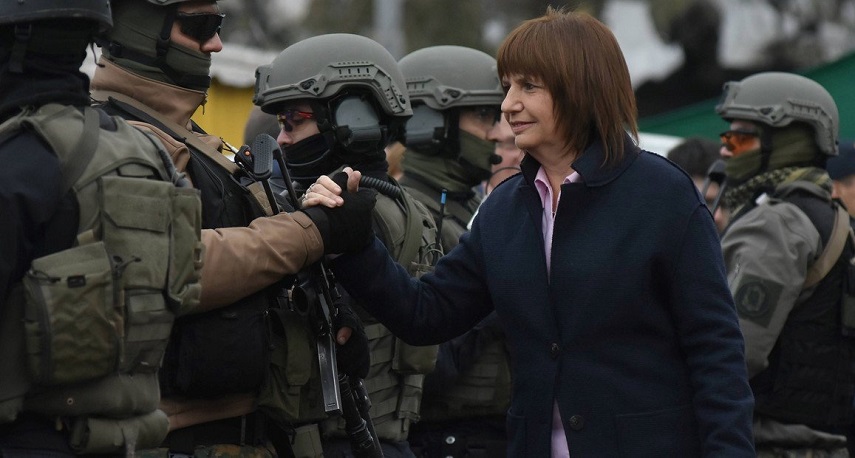 Gendarmerie to Vaca Muerta: Macri promotes US security policy in our country

WE REPUDIATE THIS MEASURE AND CALL TO BUILD ANOTHER ENERGY MODEL

On Tuesday September 17, the national government published Decree 768/2019 in the Official Gazette, signed by Patricia Bullrich, which enables the deployment of the National Gendarmerie in Vaca Muerta.

On the one hand, we believe that, beyond its complex implementation, since the geological formation of unconventional hydrocarbons covers four provinces, it is a measure taken in order to adapt the country to the US energy policy, in which energy is closely linked to war development, although this is later disguised in different ways.

The resolution says that it is “essential to provide physical protection to the facilities of the hydrocarbon exploitation plants located in the Vaca Muerta geological formation, located in the Neuquén Basin, which includes part of the provinces of Neuquén, Río Negro, Mendoza and La Pampa, in order to ensure the vital economic interests of the National State.”

It also speaks of the care and protection of physical assets of companies and people in generic terms, taking another step towards this clear doctrine of “energy security” promoted by the United States.

This measure of sending Gendarmerie to the Vaca Muerta oil fields is also directly in line with the YPF agreement with Chevron, one of the major private companies with US capitals and interests.

Far from implementing policies of community care and environment protection, the government even passes over the autonomy of the provinces where the geological formation is located. For example, the government of Neuquén has already publicly questioned the national government’s measure.

On the other hand, Bullrich sends gendarmerie to Vaca Muerta with the aim of guaranteeing oil companies’ profits by punishing the right to strike of oil workers. At the same time, the gendarmerie will also be able to act against the Mapuche communities, who fight for the right to their lands in those fields.

We believe that everything aims to intimidate and timely repress any type of protest from oil unions and communities.

Vaca Muerta was the spearhead of Macri’s labor reform project. Downward labor agreements were implemented, with job insecurity and greater benefits for the oil companies which come and do business with the strategic gas and oil goods of our country.

The results of such labor and economic policy, framed in the US “energy security” policy, can be observed in the growth of social conflict in an activity which also lacks environmental and sovereignty consensus.

The presence of gendarmerie in Vaca Muerta is an attack on freedom of association and elementary human rights and it is another step taken by imperialism over our natural resources.

We repudiate this measure and call on workers, trade unions, social and political organizations, and the people in general, to strongly reject it in unity of all sectors.

For a change of energy model. In defense of our sovereignty.